Every once in a while, after having launched your share of cars, promoted your share of banking products and helped sell a truckload of alcohol, an agency gets a chance to do something “just because”.

The Blind Tiger project which NATIVE undertook in collaboration with Arno Carstens for his “Arno+” exhibition and concert series, is just this kind of thing. A chance to be our own client, and build something that smashed through some digital frontiers.

The concept: to integrate the audience into the live music being improvised and created onstage at these small, unique events. More specifically, artefacts of the audience’s lives in the form of their memories and friends.

Each night before the concert, as the audience arrives at the venue, they are asked to “connect” by entering their Facebook credentials on specially configured iPads at the door. With no idea of what to expect, they are then ushered upstairs to watch the music.

Behind the scenes a server application automatically retrieves hundreds of photos from each of the connected users and downloads them to the sorting crew waiting in the gallery. The team tag images with theme keywords, adding them to a set of images already retrieved from Flickr representing the week’s zeitgeist outside of the event.

As the final two musical numbers are performed, the house lights drop and the Arno+ Visualiser takes centre stage. A digital paintbrush starts moving across a large screen, it’s twists and turns controlled by the music fed from the live performance. Bubbles of images burst out of the brushstroke which, to the amazement of the audience, are their images, seen as never before. Thematic similarities group the images together so that kisses, weddings, smiles, babies and others create a living collage of universal and shared human experience.

The Visualiser is controlled during the show by a custom-built Android application connected via wi-fi to the Visualiser box that lets the controller influence the speed, width, intensity and many other variables, tuning the visual experience along with the improvisation of the band.

The first show on Friday night was a major success – with lots of audience members staring dumbfounded at how their Facebook images were seamlessly woven into a live video performace. Four more shows to go. 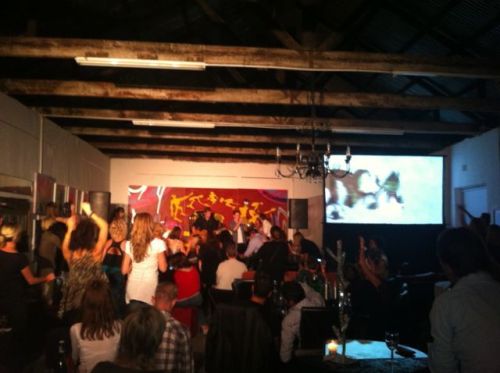 Final show, with Visualiser running on the right

Thanks to the amazing NATIVE team who made all of this happen.