Right, so the great building project has moved decisively into the next phase. That phase is defined by the erection of large steel structures which represent the major aesthetic addition to the house. And also by the first two major snags – one the fault of some previous swimming pool builder and one the fault of our architect.

So, this is what the structure now looks like: 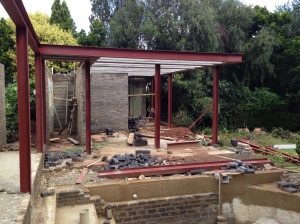 Some pretty impressive steel work going on there. However two problems are visible in this picture to the observant eye.

1. The pool, it turns out, was skew. It’s always been skew. Or the house is skew. Or something is skew. But upon erection of a wall next to the pool this became obvious. The brickwork you see in the pool is the rather costly undertaking of changing the orientation ever so slightly. I am now convinced the “changes” to the pool are costing more than an entirely new pool.

2. The steel beams are too high! Turns out the 3D drawings were just “artist impressions” and the fine steel work is, in reality, large thick steel beams. That’s ok – but someone’s measurements were off and they are now towering over the house instead of sitting nicely under the eaves the way they were supposed to.

To make a long story short, the architect did some fancy footwork and has redesigned the house “on the fly” as it were. His enthusiasm, after some initial wariness on our part, worked. And we are now officially excited about our redesign.

You will notice – if you’re still with me – that the roof facade now includes a stepped level with a skylight. This roof will also, I’m told, extend forward and over the pool.

So – challenge faced. I should also add that our architect has offered to cover any additional costs incurred by doing this – which is pretty excellent of him, and once again makes me feel good about who we are working with on this project.